Blockchain Will Be Most In-Demand Hard Skill in 2020: LinkedIn Blockchain will be the most in-demand hard skill in 2020, according to a new study by the educational subsidiary of professional social network LinkedIn.

Blockchain will be the most in-demand hard skill in 2020, according to a new study by the educational subsidiary of professional social network LinkedIn.

A newcomer to LinkedIn’s annual list of top-demanded hard skills, blockchain now tops the list of the most-needed skills in 2020, according to a LinkedIn Learning blog post on Jan. 1.

Blockchain to surpass cloud computing and AI in 2020

In contrast, a similar list of skills provided by LinkedIn Learning for 2019 does not include blockchain technology at all. Titled “The Skills Companies Need Most in 2019 – And How to Learn Them,” the list ranks cloud computing as the most in-demand of that year. In order, other top hard skills in 2019 included AI, analytical reasoning, people management and UX design. 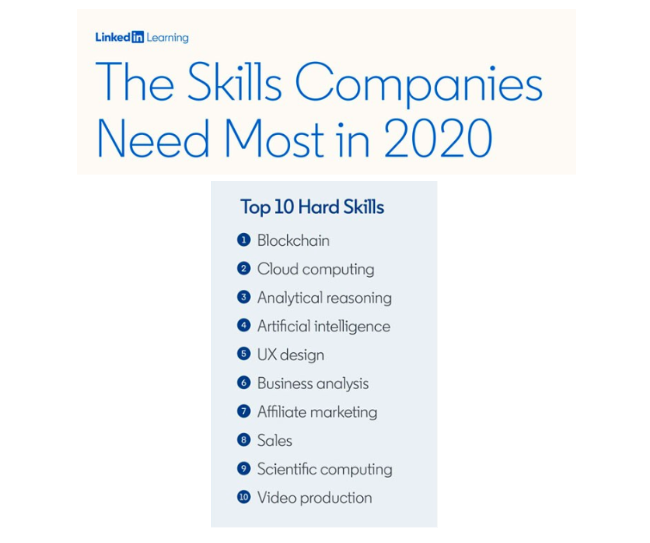 As noted in the post, demand in the recent study was defined by analyzing skills that were in high demand versus their supply. Specifically, demand was measured by identifying the skills listed on the LinkedIn profiles of people who were employed at the highest rates.

The study only analyzed cities with 100,000 LinkedIn members, the blog post notes.

As opposed to soft skills, hard skills refer to an employee’s ability to do a specific task and include specialized knowledge and technical abilities such as software development, tax accounting, or patent law expertise. Meanwhile, soft skills refer more to the way those tasks are done — how employees adapt, collaborate, solve problems and make decisions.

Linkedin says the promise of blockchain is huge

In the blog post, Linkedin outlined the immense potential of blockchain technology in terms of providing a cost- and time-efficient, secure and decentralized method of tracking transactions of all types.

It emphasized that a number of high-profile global firms such as IBM, Oracle, JPMorgan, Amazon as well as LinkedIn’s parent firm Microsoft have been actively implementing the technology. The post advises global recruiters to start becoming more aware of blockchain technology:

“Blockchain has emerged from the once shadowy world of cryptocurrency to become a business solution in search of problems. Which means that you don’t have to be in financial services to be seeking new hires who have background and expertise in putting blockchain to use. So, recruiters should start becoming familiar with how blockchain works, what its perceived benefits are, and who are the people best suited to help your company explore where this budding technology might have a role.”

LinkedIn has previously outlined the importance of distributed ledger technologies like blockchain. Earlier in 2019, a LinkedIn Asia Pacific report listed blockchain among the most demanded skills in the coming years as part of its regular feature “The Future of Skills.”