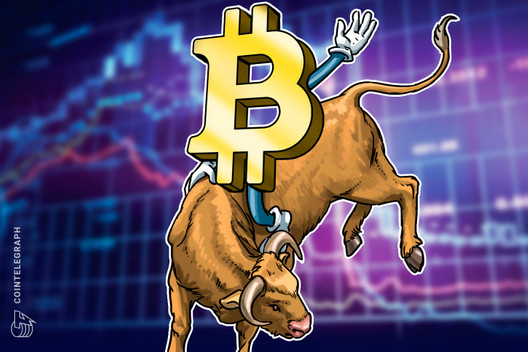 A solid rejection of $7,000 earlier this week keeps Bitcoin within the upper $6,000 range but there is a lot to reclaim, say analysts.

Bitcoin (BTC) continued to trade near $7,000 on March 27 after traditional markets showed bullish signs and the Dow Jones had its best day in 87 years.

Data from Coin360 and Cointelegraph Markets showed BTC/USD trading in a wide corridor between $6,500 and $6,900 overnight on Thursday.

Having preserved support at the lower end, Bitcoin saw its third consecutive day above $6,000 as coronavirus misery appeared to abate for some parts of the world’s financial system.

They were building on the success of the Dow, which on Wednesday saw its biggest one-day growth since 1933 at 20%. For the Wall Street Journal, this was even enough to call a bull market.

That, in turn, followed an announcement from the United States Federal Reserve to print unlimited amounts of money, something which immediately pumped markets but rattled Bitcoin proponents.

While Bitcoin continued to fluctuate, data suggested that traders were not in the mood to sell — according to monitoring resource Glassnode, exchange balances were at an eight-month low as of Thursday.

“Despite the volatility, #Bitcoin holders appear to be withdrawing their funds from exchanges. Outflow has been increasing daily since March 18,” the company summarized on Twitter.

Since it crashed to near eighteen-month lows on March 12, BTC/USD had recovered 80% at press time.

In a potentially tongue-in-cheek forecast, trader and entrepreneur Alistair Milne demonstrated that the pair may even have the potential to hit $9,000 as soon as next week.

For Cointelegraph Markets analyst Michaël van de Poppe, however, Bitcoin still had a lot to prove in order to ditch its bear market behavior.

While he called the 80% gains “tremendous,” in a video update on Thursday, he said that levels above $6,900 still remained untouched.

“I don’t feel that Bitcoin is in any bullish market right now, given that we’ve lost pretty substantial support and we didn’t reclaim anything at all,” he summarized.